Between a cold, dreary winter and my work schedule, I definitely fell off with my training. I still ran the races I signed up for in January, March and April AND finished, but they were rough!

Then, my “good foot” started getting pains, and for a while my podiatrist and I suspected a stress fracture (MRI was negative, thankfully!). In retrospect, there’s a good chance that that happened because I ran/walked several half marathons and a Ragnar Relay back-to-back without proper training before or in between.

So, I needed a REBOOT!

I’m running short distances once a week in May just to “warm” myself up for the REBOOT that starts in June. In June, I’m starting a 13-week half marathon training plan. Realistically, I can only squeeze two runs in each week, so that will have to do for now — especially since I need to use the third day for cross-training (trying to learn from where I went wrong in my last training program). 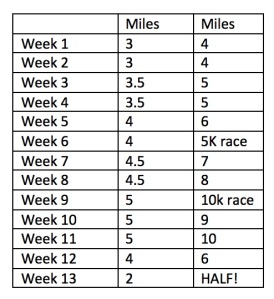 In addition the new training plan, I am also adding Orange Theory Fitness sessions to the mix starting June 1st. In the meantime, I’ve been doing total body barbell workouts at home 1-2 times a week in May.

I’ve also put on about 50-60 pounds since I broke my foot 4 years ago, and I’m sure that that’s also hindering my running progress. I read in a few places that a runner cuts 2 seconds off of their mile time for every pound lost. That means, in theory, if I dropped 40 pounds, I’d shave 17+ minutes off of my total half marathon time (not including any improvement in time from training). So, I’m motivated to get this done.

LINK: Will I run faster if I lose weight?

Today makes day 10 of following a ketogenic diet – low carbs, moderate protein, high (good) fat. It has been interesting cooking  3 meals a day every day and experimenting with new recipes. I’ve been to the grocery store almost every other day to pick up new ingredients. But, I am trying to avoid eating out for the next 30 days while I’m home (I have some upcoming travel where that will be unavoidable).

Here are some of the low-carb meals I’ve prepared so far:

Of course, what’s training without races?!

I canceled the races I had planned from mid-May until Labor Day so I can focus on training properly, getting stronger, getting lighter and coming back with a bang in September. I have to pay again, but the Popular Brooklyn Half will give me a guaranteed entry for next year. It was for the better.

Disclaimer: I received free entries to the Rock N Roll Virginia Beach and Rock N Roll Los Angeles races as part of being a BibRave Pro. Learn more about becoming a BibRave Pro (ambassador), and check out BibRave.com to review find and write race reviews!

I am amped about both locations (each beautiful at that time of year), and I can’t wait to make some progress with the new training and weight loss. Wish me luck, and follow the journey!

Back to top
Barb Sweet

Running and the Pursuit of Happiness

Run There, Drink That

Running and Laughing through the Golden State

Forward Is A Pace

My journeys as a beginner distance runner

My adventures running in Jersey and beyond

Thinking with my Fingertips

A PANDAS tale from the razor's edge of insanity

My journey to running my first half-marathon

From Dancing to Running

Running Commentary of a Dilettante's Life

The Everything Bagel of Lifestyle Blogging

Running in a Skirt

Eating vegan, running long distances and being 20-something.